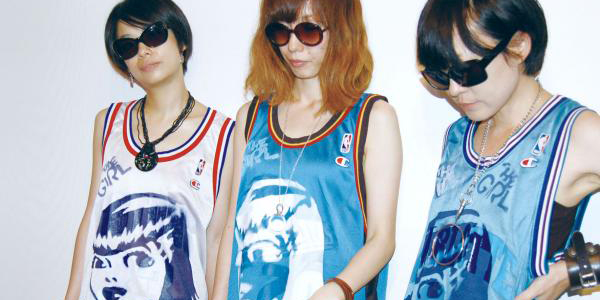 The Girl is the new-ish band of Aiha Higurashi, formerly of the bands Seagull Screaming Kiss Her Kiss Her and The Loves!, as well as a solo artist under her own name and a songwriter for artists such as Yuki (of Judy And Mary) and Aikawa Nanase.

Aiha chatted with us on episode 14 of the It Came From Japan podcast about her exploits, why humming is the purest form of music and how she gains access to the various rooms inside her head.

Listen to the podcast to hear the interview and The Girl’s song Benjamin, or read the transcript below!

So, The Girl is your new band. The band’s name is The Girl, and all the members in the band are girls too. What was the reason behind that?

“Ah, honestly I just got a little tired of being in a band (with men in it), so I just came up with the idea, with all those pretty girls around me — it’s nice.”

“It’s not talking about the difference between men and women, but it’s just comfortable for me to be around Tabasa, the bassist, and drummer Naoko. We just became friends, and it’s really nice.”

How do you feel The Girl is different from your last band, Loves!, and from your solo music and other projects?

“The Girl is more like what I had been doing in Seagull Screaming Kiss Her Kiss Her, which is my ex-band. It’s a three-piece, just Tabasa and Naoko and me, and it’s simple, and… I don’t know how to explain. Solo is more simple and, of course, I do it by myself; I sing about my private life. Loves! is more technical, and all the members are super, super, super technicians. So with The Girl I can make songs by humming, like what I was doing in Seagull.”

Is that how you write songs?

“Yeah, by humming, mainly. I don’t use guitar to make songs.”

You’re comparing The Girl with Seagull Screaming Kiss Her Kiss Her quite a lot. Do you feel like you’ve gone back to your roots with The Girl?

“Yeah. I am re-learning from Seagull. Seagull’s songs are really unique, and I really love my style (in that band), and I realised that my style is unique, and that’s the reason why I’ve got to do (it) my own way in the new band.”

I was a fan of SSKHKH when the band were still together, and then listening to your solo music and listening to Loves!, and clearly Seagull had a very organic, quite primal kind of sound.

I definitely can hear that on The Girl’s album.

“Yeah. But everybody who listened to the first album of The Girl said that it sounds like a garage band or alternative rock or something like that, and I… don’t… like that kind of compliment, haha. I’m not (saying) the first album was bad — it wasn’t bad, of course — but I realised that I can break the songs, and cut (them) into pieces, and I can make more using free style and making songs by humming. So I want to write songs based on my humming, which is gonna be very unique.”

Just before SSKHKH broke up you released in the UK a compilation album, Red Talk, on the label Cherry Red. I guess the timing wasn’t great; it came out just as you guys broke up. How do you look back on that time?

“Ummmm, it wasn’t complicated (or) anything. Me and Nao were so close, so tight, and so like sisters, and we toured together like 30-day tours in America six times, and we were in the same room all the time and, you know, it happens between girls. It’s natural that I and Nao thought it was now time to go our different ways. It had been long that we’d spent time together, so close, so tight and like sisters.”

Do you hope to be able to release music in the West again, with The Girl or your other projects?

“You mean release a CD or a record? Actually, The Girl’s Lost In Wonder vinyl is selling in the US.”

Oh, is that released by a US label or is it the Japanese version?

“It is a US label but owned by a Japanese guy; he’s my ex-manager at Sony.”

What’s the name of the label?

When SSKHKH were around, back in those days, when I first found out about the band it was from a Japanese friend who lent me a cassette tape and I grew to really love these songs, and when I tried to buy the CDs I couldn’t find them anywhere. In the end, it took months; if a friend was going to Japan I would ask them to pick something up for me — cos Seagull had a lot of albums too, right? — but the one album I couldn’t get anywhere was 17.

I just couldn’t find it. And then eventually, one day — this must be 10 years ago or something — I found an online store, probably CD Japan, and the store’s site was in English and they were selling Japanese music but they would deliver it overseas. So I bought 17.

“Must be expensive, yeah?”

It was so expensive! I also bought the video, you know you made a VHS with a different music video for every song on the album, and it was so expensive. It took weeks and weeks to arrive and I had to pay import tax. Whereas these days it’s so much easier for people in other countries to get your music digitally or whatever. Do you think it’s helpful now that people can find your music online?

Do you feel like it’s not even necessary to release a CD in another country because people can just get it from iTunes?

“No! It’s one of my biggest dreams, releasing CDs or vinyl or MP3 or whatever that can sell in the US, or overseas, like Britain or everywhere. 6Tunes.TV sells the MP3 version too. So everyone can buy it.”

In terms of the music you write for other people, for example you wrote quite a lot of songs for Yuki on her various solo albums, is that very different than writing for yourself?

“Actually, Yuki was a big fan of me, and I didn’t know much about her. She was really nice, and when she offered me some songs to write for her, I was about to become solo, so I had like five songs for my debut as a solo, so it was good timing. She liked the songs that I’d made, so she picked up five songs — I mean, everything that I had as a solo. So it was quite easy, and a nice offer.”

Yuki’s voice and your voice are so different, because you have a very low voice and she has a very high voice.

Was that something that was quite difficult, to make songs that would match her voice?

“Not really. I don’t exactly remember, but we just changed the key for her. But she was really a hard-trying musician, and she had a great low voice too. So she was great.”

Is it quite hard to juggle between projects? You also had a third solo album about a year and a half ago, and the new band, and writing for other people. How do you keep on top of everything?

What happens if you try to knock on the door and there’s no answer? Or it’s locked? Does that ever happen?

“Yeah, it’s always happening, haha. It’s always confusing too. Sometimes I knock on the door of the solo room when I was trying to write songs for The Girl.”

You also keep a blog, Sky Nikki, which seems to be a popular blog. It’s all in Japanese, so I guess our listeners wouldn’t be able to read it, but what kind of things do you write about on your blog?

Which bands in particular would you recommend at the moment?

“Uh, a band called Crypt City. The bassist was in Loves!, and he also produces a lot of bands; he’s a producer. And he produced our first album of The Girl, Lost In Wonder. And he has a lot in common with me, in music.”

What kind of music do they play?

“I don’t know; if I could explain that, I could be a writer or something! Haha.”

That must have been kind of weird, though, to have a member from your last band producing the album by your next band. It must be like having an ex-boyfriend or girlfriend watching you while you’re in bed with the new one.

“Haha, yeah, it sounds like that. It sounds weird, maybe. But Kentaro — his name — we have a lot in common in music, so when we were in Loves!, he understood me a lot, and he helped me a lot.”

OK, we’re going to play a song from The Girl’s album Lost In Wonder, and the song is called Benjamin. What can you tell me about the song?

“Benjamin is quite a strange song. There’s no one I know called Benjamin, haha. I created the person. It’s like, it’s about boys’ and girls’ stuff. It’s like, I don’t know. It’s like, breaking up with Benjamin, and Benjamin… I mean, sometimes men… Um, no, no, no, I mean, women also, but, uh… I don’t know! Sorry.”

That’s alright, we’ll let the song do the talking for you. Thanks for joining us on the podcast!