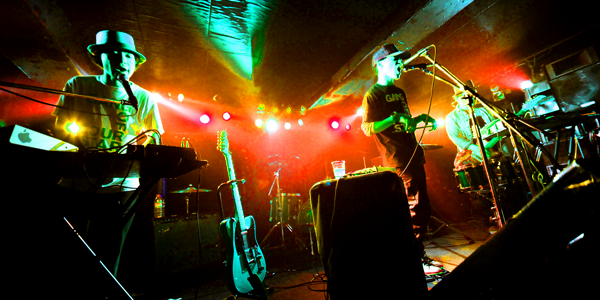 Interview with Gen Kitajima of the band Mont Blanc (comprising Gen and his twin brother, Dai). We chatted in Shibuya’s Centre-gai shopping street the day before Mont Blanc flew to England for a recording session and festival appearance.

Thanks for coming on the show. You’re playing at Liverpool Sound City, Studio 2 venue, on 19 May. How do you feel about going to Liverpool?

“I feel so good and so excited, and so scary!”

“Uh-huh. My English is so… not better. I play music, only music. To everybody’s heart.”

So maybe it doesn’t matter if you can’t speak English, because it’s from the heart, to the heart.

You’ve been to England before; you played in England in 2010.

At In The City.

That’s cool. And tell me about your bandmate.

“My band’s member: twin brother, Daisuke Kitajima, is the vocal, and so he is writing songs and I program it. And sometimes support members come.”

What’s it like to play in a band as twins?

I think all bands fight, but if you’re family then it’s OK to fight.

“Yes. We can be honest to each other. True hearts.”

You can say your true feelings and you don’t have to pull any punches.

When you go to England, apart from playing at Liverpool Sound City, what else are you going to do?

And will you then release that later in Japan as an album or something?

“We’ll release next year, in maybe May. I want to collaborate with any foreign-language artists – UK, Australia, America. If you hear, call me, haha.”

OK, thanks very much for talking to us. We’re going to play a song by Mont Blanc now – what’s the name of the song?

What’s the song about?

“What’s the song about? I think very important is song’s groove, not words. So, groove and the story. So for example, language doesn’t matter. I write music, not words. It’s a feeling.”