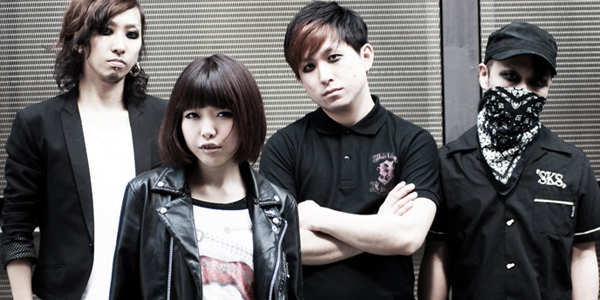 Cantoy are a four-piece band originally hailing from Nagoya, now based in Tokyo and signed to Splatter Records, the label owned by Dai Kato from Ketchup Mania and KillKills.

Vocalist miri-pow, guitarist Catherine, bassist Haga-Chang and drummer Ken joined us on episode 13 of the It Came From Japan podcast to talk about their new album, Kill (due out late July 2012), and their obsession with beer.

Listen to the podcast to hear the interview and new song Tenkaippin, or read the transcript below!

First, tell me a little bit of background about Cantoy.

Haga-Chang: “Cantoy was formed in Tokyo in 2004, but its name was Candy Toybox. In 2009 we changed the name in order to stand on a new starting line. The name is Cantoy.”

Your sound is a mix of hardcore and pop with some digital elements; it’s not exactly digital hardcore though. How do you describe it?

Haga-Chang: “Our sound is digital hardcore, but miri-pow’s vocals are cute, so it’s music whose imitation is impossible. It’s Cantoy.”

Which bands are your heroes?

There’s quite a big gap between your heavy guitar sound and the very poppy choruses. Is that deliberate?

Catherine: “It was made naturally. When we had made Cantoy’s music this big gap was born. But it’s our weapon!”

Your new album, Kill, is out at the end of July, two years after MissMatch, your previous album. What’s different on this new album? How has your sound changed?

Haga-Chang: “Kill was made more offensively than MissMatch. MissMatch was an introduction to Cantoy. I think that people who love Cantoy can enjoy themselves more.”

Cantoy have a few songs about alcohol, and you’re always drinking on stage and you sometimes hand out beer to the audience. What’s your poison?

The booze is probably partly what fuels your crazy live shows. What’s the funniest thing that’s ever happened during a Cantoy show?

Catherine: “Do you know the performance called ‘guitar spin’?”

You mean when you spin the guitar around your body?

Catherine: “Yeah. I (hit) the head of miri-pow one day (with my guitar during) that performance. Miri-pow’s head ‘CRASH!’ Guitar spin performance, onto miri-pow’s head, ‘CRASH!’ ‘OUCH!’ She said, ‘Are you trying to kill me?!’ Blood came out – a lot of blood.”

Cool! And I hear Cantoy plans to tour in the United States in the near future. Is that right?

Haga-Chang: “Yes, it is true, because we want to go to the next stage. It is a challenge for us, but we love the United States, so we are looking forward to it very much.”

And miri-pow, you’re a model for Zipper magazine in Japan. How do you balance the modelling and the music?

Miri-pow (in Japanese): “With both modelling and music, it’s not really a problem to find a balance because I enjoy each one so much. I’m happy to be able to do both.”

And of course your guitarist’s name is Catherine, which in the West is a girls’ name. How did you end up with the name Catherine?

Catherine: “A slim person in Japanese is called ‘kyasha’. (Catherine) became my nickname because it sounds very similar.”

(NB: The Japanese pronunciation of Catherine is ‘kyasarin’.)

And finally, what is Cantoy’s raison d’être? Why does Cantoy exist and continue to make music?

Haga-Chang: “Because it is for enjoying our life. We want to give dreams and freedom across the world. So please support us. Thanks!”