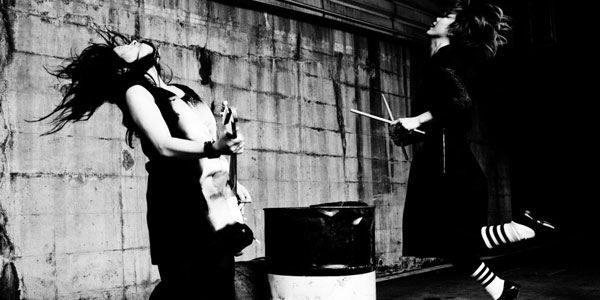 Garage band Detroit7 have been a revered fixture on Japan’s live circuit for a decade and have recently gone from being a trio to a duo, with the departure of long-standing bassist Nobuaki Kotajima.

Rather than replace him, guitar-vocalist Tomomi Nabana and drummer Miyoko Yamaguchi decided to carry on as a no-bass duo, sort of like a much louder and faster White Stripes or Black Keys, and rework their songs to suit. The result is a more dynamic and even tighter sound and a flurry of new material.

Nabana appears on June 2012’s It Came From Japan podcast to talk about the new version of Detroit7 and to play us a song so new it hasn’t even got a name yet.

Detroit7 recently became a two-piece – there were originally three of you but your bassist left. How has it changed your sound?

“(There’s) no low (end), and a very big responsibility for Miyo and I. It was very difficult, but now it’s become fun.”

When I saw you a couple of weeks ago, I don’t think there was no low-end. You’ve made your guitar sound fatter, right?

“Oh really? My guitar has not changed, but Miyo’s drums are very fat and loud. (She’s a) beast!”

At that show you played maybe four new songs. Have you been writing as a duo new songs that work better as two people?

“Yeah, very fast – more than (as a) three (piece), because we are two people, so it’s easy for conversation and to create.”

Do you find that you’re writing different kinds of songs?

Also you’re still playing some older Detroit7 songs as two people, so again you’ve had to maybe change those songs a little bit because there’s no bass.

Was that difficult to do?

“Yes. Because in my head, I can hear the bass, so it’s very difficult. But recently it’s getting better, maybe, haha.”

When I saw you play at that show, for the older songs I could also hear the bassline, even though it wasn’t there, because I’m used to hearing it with the bass. But the new songs of course, because they were new songs, all I could hear was what was really there – the guitar, the drums and the vocals. So maybe it’s something everybody has to get used to. How about having just two people on stage instead of three? Does it change how you use the space on stage?

“Yes, Miyo is right in front of the audience and I’ve moved to the right. I have more space, haha.”

Is that a good thing or a bad thing?

“Yeah, a good thing. I can make big movements.”

What’s the plan for Detroit7? What is your next step?

“Next step? I don’t know! Haha. But we want to write drum- and vocal-only songs (with no guitar) and we wanna find more new things.”

When I saw your recent show you played a cover of Tom’s Diner by Suzanne Vega, and that was also drums and vocals only, until the end when you came in with your guitar. Why did you choose that song?

“Um, we wanna play drum- and vocal-only songs, but we have no songs (like that yet).”

Will you be doing some recording soon?

Last year you made a 7-inch single?

Do people still have record players in Japan?

“When you get the vinyl you (also) get a download code for the MP3s. So you can use the record for an ornament, haha.”

OK, great. We’re going to play a song by Detroit7 now on the podcast; this is a brand new song; it’s a live version. Tell me a little bit about the song.

What’s the song about?

“Being pushed past my limit.”

And what happens if someone pushes you past your limit?