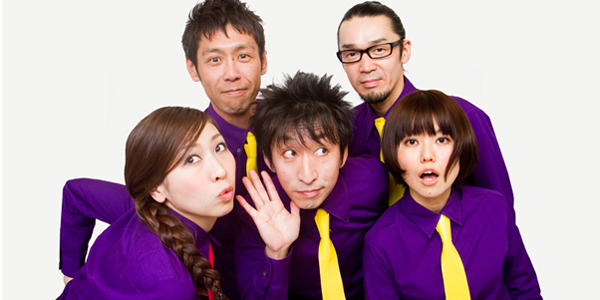 It Came From Japan is thrilled to announce that Budo Grape, Japan’s fruitiest new-wave rock band, will return to the UK this autumn!

Budo Grape will play live on 9 November at the Doki Doki festival, which will be held at Manchester’s Sugden Sports Centre. The 2011 edition of the festival drew 1,600 fans of Japanese pop culture, and this year the organisers will have double the space for an even larger event. Attractions besides live music will include film screenings, videogame demos, fashion shows and Japanese food stalls, with a fundraising maid-service cafe to boot.

Tickets for Doki Doki festival are on sale now.

Hailing from the retro-futuristic city of Neo-Nagoya, Budo Grape played their debut UK tour in October 2012. Look, here they are on Facebook and Twitter. You can read more about the band here and here, and hear their songs on episodes 12, 14, 15 and 16 of the It Came From Japan podcast. Or head to YouTube here or here to see some videos.