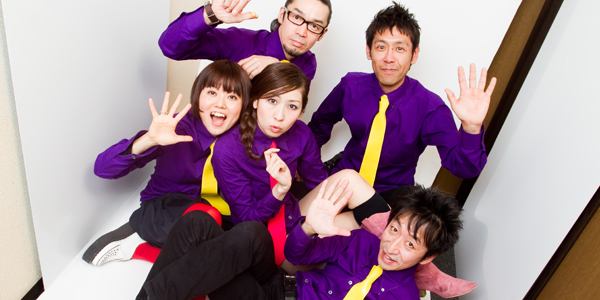 It Came From Japan is thrilled to bits to announce that Nagoya band BUDO GRAPE will play three UK shows at the end of October. Oh yeah!

The band are fronted by model and radio personality Quminco on vocals and Nagoya music legend Nagai (formerly of The Shockers), who is Budo Grape’s chief songwriter and guitarist.

Formed in 2001, Budo Grape released their first full album “KOIBITO WA KOUSHITE TSUKURU” in 2005. The album was a hit in the Japanese underground scene, and was followed by a number of other exciting albums.

The band’s cred soon spread, and they were invited by overseas fans to play in the United States, performing their successful debut live tour there in 2008 and releasing a best-of album, “JUICE!”, via a US label. The band also participated in a tribute album for French singer-songwriter Claude Francois, released in Japan as well as France.

New keyboardist Naho joined the band in 2012, bringing with her an edgy synth sound that has given the band’s sound a boost. They released their sixth album, “KARE NO NAMAE WO OMOIDASENAI”, the same year.

The band, whose members all have Grape as their last name, claim to come from “Neo-Nagoya.” They continue to tour Japan with their crazy live show and catchy songs, and in October 2012 they will perform their long-awaited debut concerts in the UK.